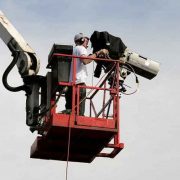 Access equipment is responsible for delivering the most dramatic of all movie camera shots: the crane shot. It’s also one of the hardest shots for the camera operator to perfect.

Job prospects as a camera operator

There are between 5,000 and 10,000 camera operators in Australia, and there has been significant employment growth in that field over the past five years. One reason for the increase in the number of home-grown camera operators is Screen Australia’s Significant Australian Content test. If the subject matter, location and production staff reflect a minimum amount of Australian content, a film can qualify for a ‘Producer Offset’ grant, drawing on a fund of 824 million dollars set aside to grow Australia’s film industry.

There should be steady growth in this field until at least 2018. Camera operators are not only required for cinema, but also for television and web broadcasting. Television camera operators have steady work and can make a healthy income. For cinema releases, that can mean months of long hours and hard work, then unemployment until the next film project comes along.

Usually a BA or technical qualification is all that’s required

Post-graduate education is not required for camera operators, but they are expected to be able to work with directors to frame shots and plan camera movements, in addition to being able to maintain and do repairs to the camera. The work often includes long hours in uncomfortable positions and can be repetitive.

How crane shots are done

The crane shot is among the most difficult to do. The Crane shot typically used to be the sign of an extravagant budget, but that is no longer the case. New technologies and techniques have reduced the cost to a few hundred dollars.

In a crane shot, a jib is affixed to the top of the crane boom. It must be very sturdy and lightweight, as 35mm film cameras can be very large and heavy. In addition, the jib must accommodate a rig to hold at least the camera operator, and possibly the director as well. The jibs often have baskets filled with weights for counterbalance.

Crane shots are generally done with telehandlers. The booms are commonly six metres; the largest one, used in Hollywood, was seven metres. This monster actually won an Academy Award for Technical Achievement in the 1960s, it was so impressively huge.

Most cranes of that era were manually operated, using an experienced boom operator who knew how to raise, lower and “crab” the platform. “Crabbing” is where the camera moves along with the actors. Many rehearsals are required for this, because the camera operator must keep the shot in frame, the focus puller must keep the shot in focus and the actor must synchronise his movements with the machinery.